These are complex intricate trails, steep stairs of the hundreds of stone steps and dangerous suspension bridges, laid over bottomless chasms. Some outstanding historic buildings are properly insulated from the world, from ancient times they served the sole purpose – to protect the owners against intruders. Beautiful castles and monasteries are located on the cliffs, peaks towering cliffs and difficult mountainous terrain, where you can easily get lost without a guide. The more interesting discerning travelers to visit these attractions are difficult, each of which holds a lot of secrets.

One of the most inaccessible facilities in the world to be found in Slovenia, where at the top of 130-meter cliffs located ancient castle of Bled. He is one of the oldest in the country, Bled Castle is located in an incredibly beautiful area, near the eponymous lake. A rocky cliff on top of which it is located, literally hanging over the lake shore and is surrounded by dense forest. Surprisingly, build a castle in this difficult terrain people have managed to more than a thousand years ago, the first official mention of the castle date back to 1004 year. 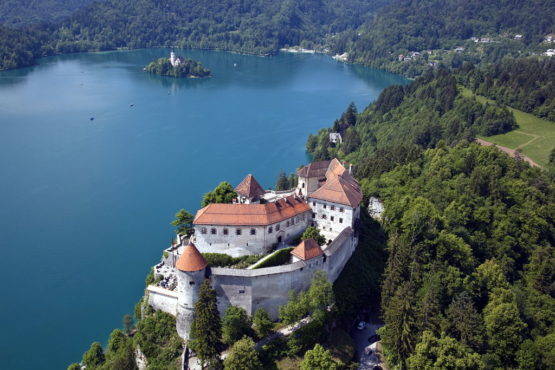 For hundreds of years the castle was able to save a lot of old architectural elements, is considered to be the oldest tower in the Romanesque style, it was many years ago was used to observe the surroundings. The appearance of an ancient castle has changed greatly during the Middle Ages, it was supplemented by new buildings, including the stone towers and protective walls. Entrance to the castle hidden in the thick woods, it leads to a narrow stone staircase, you find among ancient trees without a conductor, too, will not be easy.

In the castle grounds is conducted guided tours, during which you can learn a lot of interesting stories about his appearance and even assess the internal situation of some buildings. A significant part of the castle is a historic museum, where a rich collection of everyday objects, old clothing and weapons. Many tourists tend to visit these amazing places at sunset, at nightfall high cliff and it is located on an ancient castle is decorated with spectacular lighting.