Funnel diameter of 305 m and a depth of 123 m, full of underwater caves, mazes of narrow, stalactites and marine life, including at the most innocuous, nicknamed “cemetery divers”. 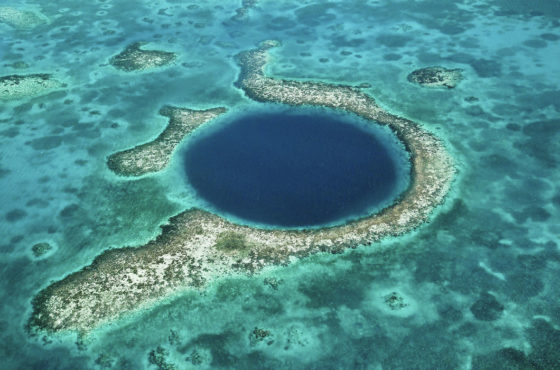 The Great Blue Hole is a giant submarine sinkhole off the coast of Belize. It lies near the center of Lighthouse Reef, a small atoll 70 km (43 mi) from the mainland and Belize City. The hole is circular in shape, over 300 m (984 ft) across and 108 m (354 ft) deep. It was formed during several episodes of quaternary glaciation when sea levels were much lower. Analysis of stalactites found in the Great Blue Hole shows that formation took place 153,000; 66,000; 60,000; and 15,000 years ago. As the ocean began to rise again, the cave was flooded. The Great Blue Hole is a part of the larger Belize Barrier Reef Reserve System, a World Heritage Site of the United Nations Educational, Scientific and Cultural Organization (UNESCO).

This site was made famous by Jacques Cousteau, who declared it one of the top ten scuba diving sites in the world. In 1971 he brought his ship, the Calypso, to the hole to chart its depths. Investigations by this expedition confirmed the hole’s origin as typical karst limestone formations, formed before rises in sea level in at least four stages, leaving ledges at depths of 21 m (69 ft), 49 m (161 ft), and 91 m (299 ft). Stalactites were retrieved from submerged caves, confirming their previous formation above sea level. Some of these stalactites were also off-vertical by 5˚ in a consistent orientation, indicating that there had also been some past geological shift and tilting of the underlying plateau, followed by a long period in the current plane.